I confess, reading all the news this morning, that I have had a quiet little cry.

She has been there all my life. My own mother was only 19 when Elizabeth ascended the throne, 11 years before I was born….

It feels quite strange that I am sat in a hotel room in Limerick, chairing a conference in Tokyo, in the small hours of the morning, reading The Guardian and the royal.uk websites, shedding a few tears…

I shall not mourn having left the UK. Life in Ireland has proven to be wonderful – and moving probably the best thing I ever did. But something that had somehow continued to make the UK home has now gone, and leaves with the country in turmoil and seemingly irrevocable decline …

From 1st December 2020 I take up a new post as a Lecturer (‘B’ Above the Bar) in the Business Information Systems group in J.E. Cairnes School of Business and Economics, National University of Ireland, Galway.  It will be almost 17 years since I was appointed as a Lecturer in the Information Systems Institute (ISI), University of Salford, in January 2004.  Salford was at around No. 50 in the UK rankings at that time, and the IS Group I joined likely No.2 in the country.  As an Early Career Researcher with a new PhD, I was awarded a 30% research allowance, which grew over the succeeding years, hitting 60% at one point.

During those 17 years, however, the ISI was absorbed into the newly created Salford Business School, which experienced many years of poor leadership and low morale.  The institution as a whole has struggled over the past decade, falling in the UK rankings, and times have frequently been quite hard for an IS researcher. Nonetheless, I was promoted to Senior Lecturer, then Reader, during this time, and, briefly, in the past couple of years, to (Interim) Associate Dean Research and Innovation, in the School, and these have been in some ways the most rewarding years of all, with better leadership and better morale.

Yet, due to the decade of austerity in the UK since 2010, having seen my salary fall, in real terms, year in and year out, I will now receive a decent pay rise when emigrating to Ireland, despite my title falling from Associate Dean back down to Lecturer.   Also, the pressures of UK policy for Higher Education seem set to shrink the sector down to a top group of research-intensive universities, in the coming years, with the rest forced either to partner with, or become Further Education Institutions – with little if any research going on in them at all.  Salford – at No.103 in the UK rankings this year – seems more likely to be in the last category, than the first, and my research allowance for this academic year at Salford was set at 20% – the maximum allowed in the School. It will 40% – the standard for a Lecturer (B Above the Bar) – at Galway, in a thriving IS group with a strong research culture.

So, there is push, as well as pull, in my career, to leave an Institution that is struggling against severe headwinds, and to join one – at whatever level – that is already an established and leading research-led University (ranked 238 in the world!).  Equally, I must add, as the UK continues its march off the cliff of Brexit, with the potential for the break-up of the union to follow, and much economic pain with it, the prospect of returning to the EU is extremely welcome.  Finally, I must say, it’s a no brainer, however, when the beautiful Atlantic coast of Ireland is compared to the grim and often depressed urban sprawl of Greater Manchester.  And I’m already used to the rain.

Even when the gain is clear the pain required to get it is often dear and emigrating in the midst of a global pandemic is a challenge in itself.  I’ve got warm feelings of gratitude and comradeship for many of the colleagues I have worked with over the past 17 years, who I now leave behind in Salford, and working relationships I will miss. There are some great people there, and it is a shame for them that things in the UK are as they are.  But the pushes have become too strong for me to bear, and the pulls too enticing to resist, and the time has come for me do what many others have been doing during the years I have given to Salford – to leave for pastures greener.

In the summer of 2015 I have finally published my first solo-authored book, with Palgrave MacMillan. Please see the website I have made about it at

On 3rd February 2015 Ashgate Publishing formally published my first book, a collection of essays entitled, “Gramsci and Foucault: A Reassessment.” The first conversation with the publisher was in January 2011, so this book has taken four years to complete. I first started reading Foucault and Gramsci myself, however, in 1995, so you could say it has been twenty years in the making. I wrote a call for chapters, distributed it widely, and chose a selection of the abstracts that were submitted to me to make a collection. Then they wrote their chapters and I organised each to be reviewed, (they rewrote them based on the reviews), formatted and edited them, indexed them, and wrote my own, too, and an introduction to the lot which you can read – also available via a link on the publisher’s webpage. I was greatly honoured that one of biggest names in the field of critical theory today, Stephen Gill, at the prestigious York University, Toronto, Canada, agreed to write a Foreword for the book. Two other big names wrote testimonials for me, for the back cover, too. It’s a great first volume, and I am suitably proud! It remains, nonetheless, just the start: there is much yet to do!

Colin Kreps threw his lot in with me – and took my surname – on 27th August 2014 – and we went back to Skye, and then for a week on the Isle of Arran, for our honeymoon. There is a full website detailing the ceremony and the honeymoon at http://www.davidandcolin.co.uk/ 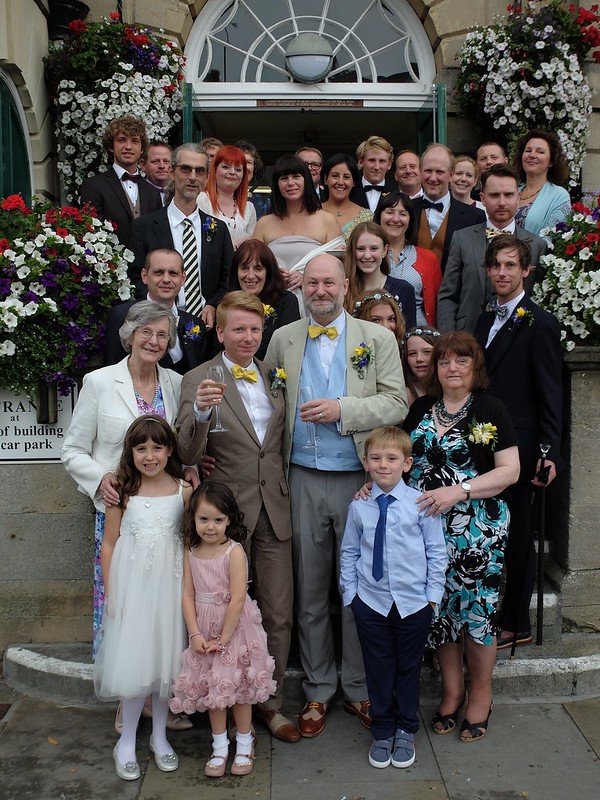 I am quite a fan of the Apple ecosystem, with my iPhone 4S, iPad2, and MacAir. But I also enjoy – and use – many Google products, too, such as Docs/Drive, and, of course, on my smartphone, GoogleMaps. It is interesting to see Tim Cook apologising for the poor quality of Apple Maps in iOS6. However, until it is clear that this has greatly improved, although I may update the iPad, I am very reluctant to upgrade my phone’s software to iOS6, and thereby lose the GoogleMaps app native to iOS5. The war between Apple and Google is starting to seriously interfere with my enjoyment and use of both!

Today this – and several of my other sites – cease to be hosted on my own dedicated server – my own ‘box’. Today the operation shifts to a virtual dedicated server, on a shared ‘box’. This is a sign of the times, in many ways, as hosting other people’s websites has become a big player’s game (long ago) and I am rather too busy in ivory towers to spend much time on something that has become something of a hobby. Virtualisation, moreover, is also a sign of the times, and this deal is a third of the price of the last one! Do I feel nostalgia? Well I never saw my own ‘box’ – it was kept in a locked warehouse in Nottingham, where the new, shared box, is, too. So no, no tears for the past.

I have spent the last five hours, after three and half years with Pivot, completely migrating my entire blog from March 2007 to September 2010, into a new WordPress installation. Why? Because I wanted to create a page with all of the Peru entries, and found it not only difficult, but ended up screwing up the entries in Pivot, almost losing one, and mucking up the date sequence. So I exported the lot into Movable Type format, installed WordPress on my server, imported the lot into the installation, sorted out all the dates, and hey presto. It was quite time-consuming get it all sorted out, unfortunately – the export/import mucked up ALL the dates (US vs British dating) which required amending them all – BUT WordPress, unlike Pivot, lets you do that 🙂 AND now I have a lovely page all about Peru. And all the wonderful advantages of WordPress. I have been thinking about migrating for, oh, at least a year. I tried in fact, over a year ago, but the installation process was a nightmare. This time it took 5 minutes – they’ve got it sorted now 🙂
So welcome to the New Blog, just like the Old Blog, but with a new engine!

END_OF_DOCUMENT_TOKEN_TO_BE_REPLACED

So Facebook incorporate commercial facebook pages as part of their new revamp. Now what used to be simple one-page ads become full-on profiles just like people. Companies are now people on Facebook, just like legal entities in the wider world. What a shrewd move. Their clever adverts will appear in our newsfeeds, thumbs of their antic photos jostling with teasing half-clues bristling with ‘buzz’. The line beyond which the early populace of Facebook will suddenly enmasse desert to some platform less overtly a paragon of establishment corporatism could be crossed at any moment. Watch this space.